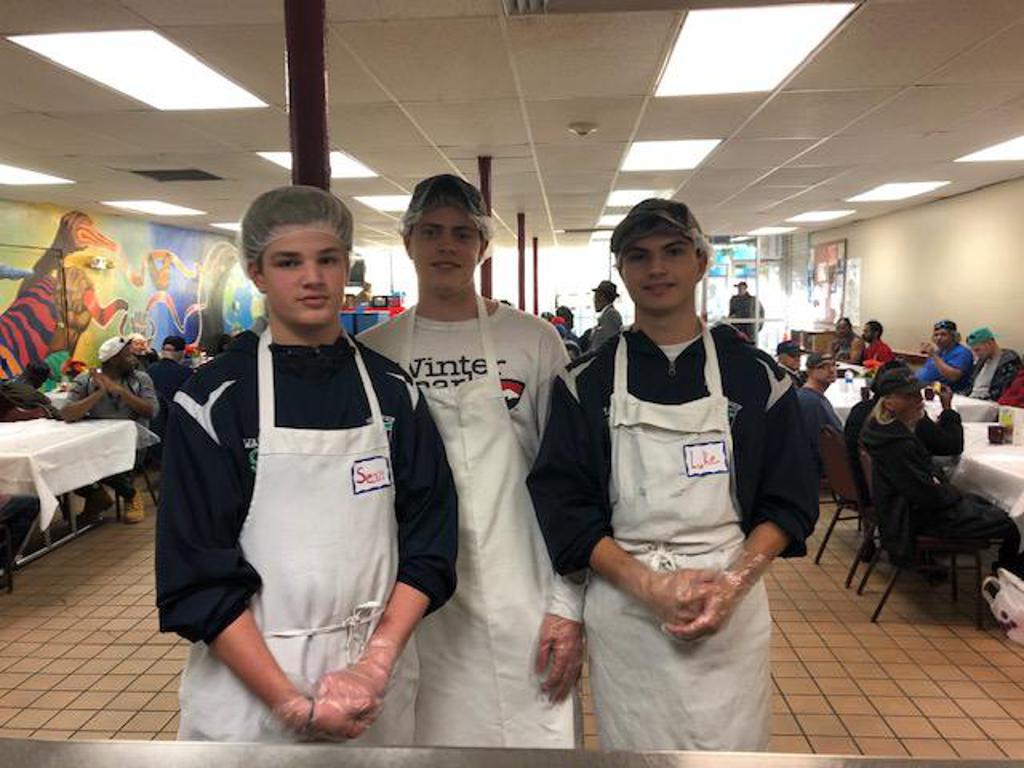 New Trier Gray has chosen to serve  breakfast monthly at A Just Harvest soup kitchen in Rogers Park. Roughly 200 people are served meals daily, 7 days a week. Each month four Gray players provide a hot meal for children and adults. It's a humbling experience for the players to cook and serve meals to people from all walks of life, who are confronted with the choice between paying the rent, putting food on the table or paying for medication. Congratulations to the Gray Team and Alison Walker for serving this organization.  For more info:  https://ajustharvest.org/volunteer/serve-community-kitchen/ 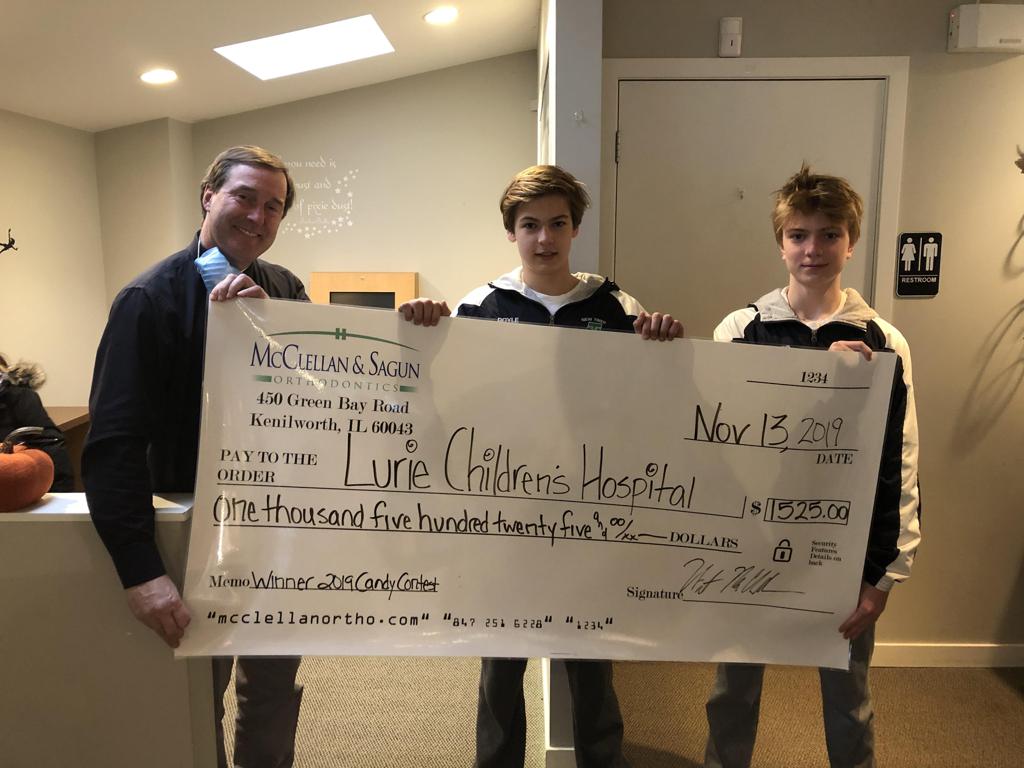 New Trier Junior Varsity Hockey team and The Winnetka Schools collected 763 pounds of Halloween candy which were donated to McClellan Orthodontic’s Annual Halloween Candy Drive. McClellan will be donating $1,525 to Lurie Children’s Hospital in honor of the winning team. and WE WON.  Lurie will be presented a check at their annual Winter Wishes party.  It is All for the Kids!

Big thank you to New Trier JV Hockey for collecting and transporting the candy.

Congratulations to Players selected for our 2019-2020 Teams.  Team Rosters have been moved to the page marked "Boys Teams". 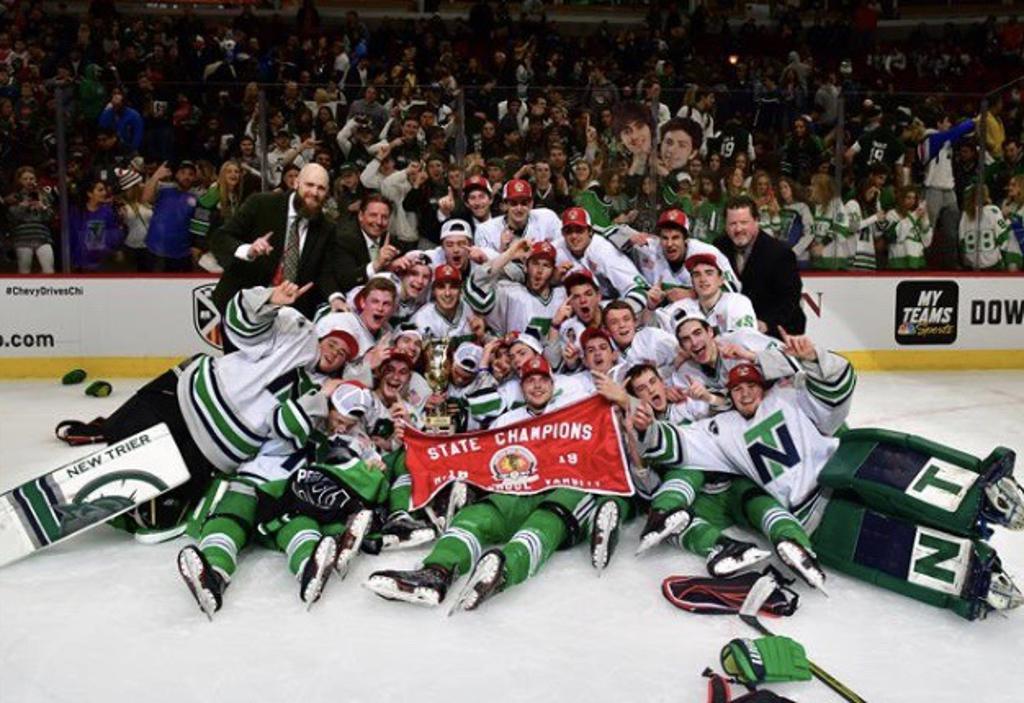 The New Trier combination was the top scoring line on the Illinois team and Bobby Soudan was awarded Most Outstanding Forward of the tournament.

Highlights from the State Championship! 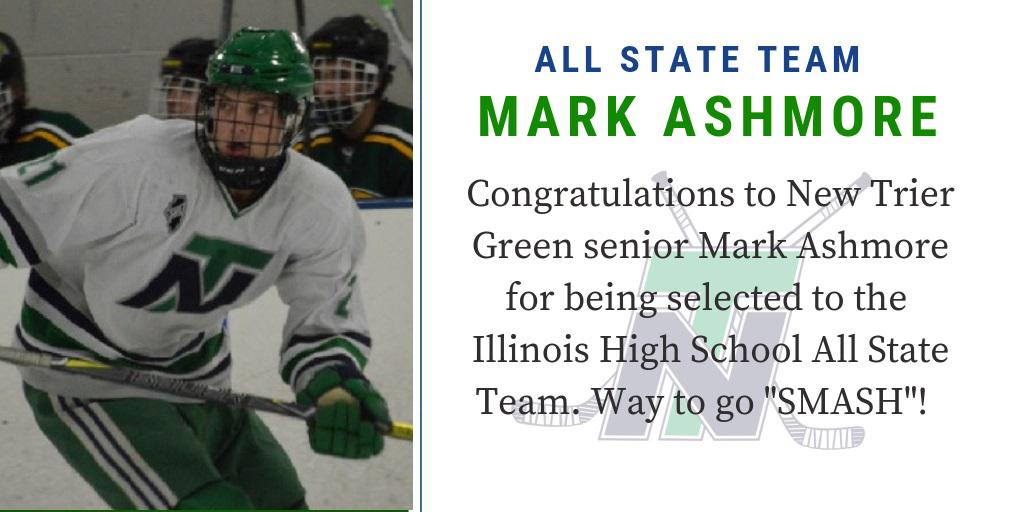 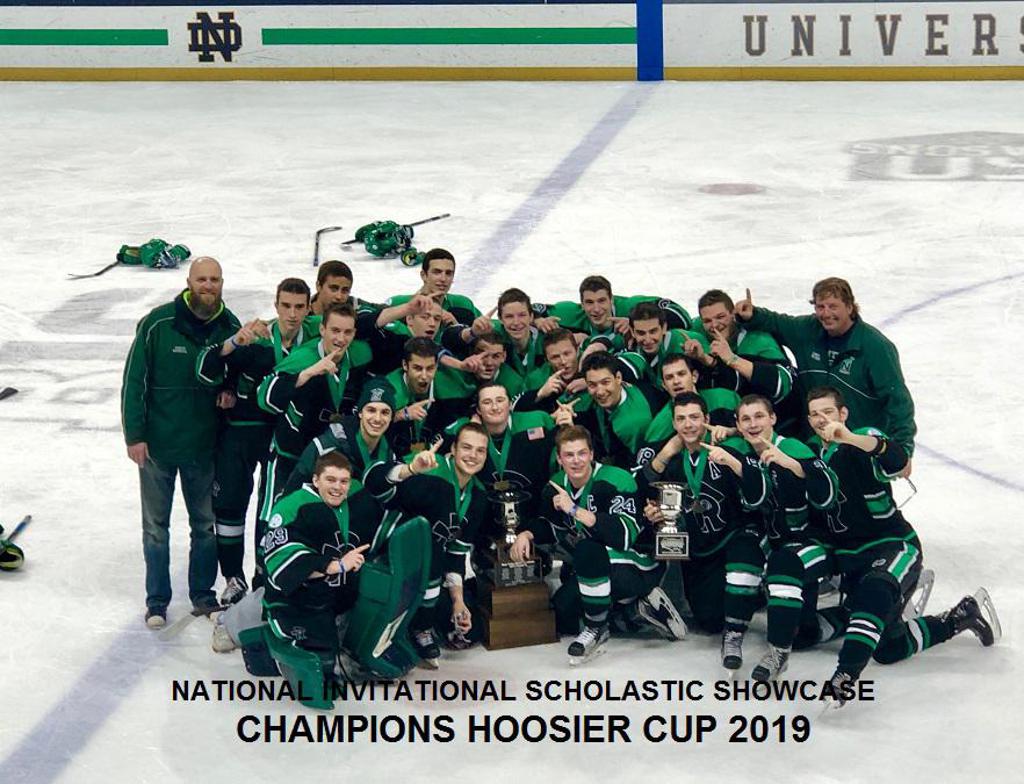 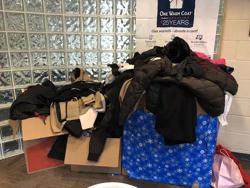 As part of our yearly tradition, New Trier Hockey Club collected gently used coats during the holiday season through the One Warm Coat drive. This year we were able to donate 125 coats to Cornerstone Community Outreach in Chicago, which is committed to providing shelter and finding homes for families and individuals who are at the greatest risk of being excluded from necessary services.

Thank you to all New Trier family and friends who contributed! 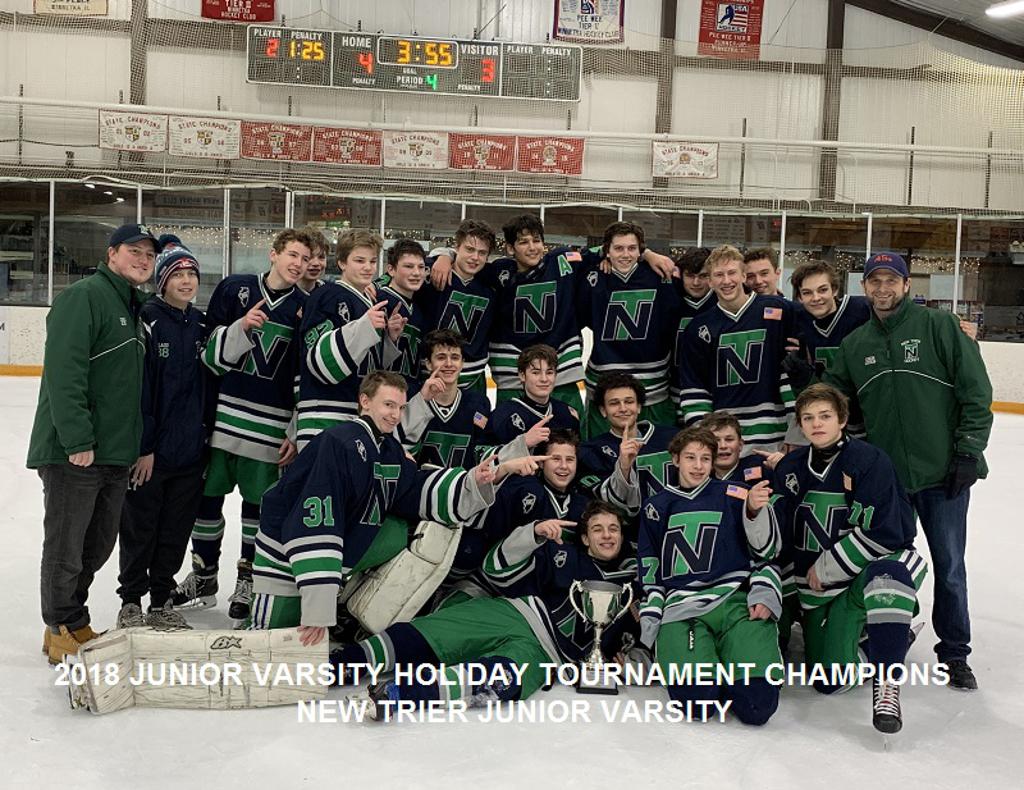 Quadheader Raises Over $15,000 for Misericordia 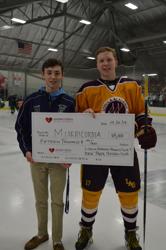 Proud of all the players from New Trier Hockey Club & Loyola Academy Hockey Club for raising over $15,000 for Misericordia Heart of Mercy at the annual Quadheader.

“It’s a great cause,” said New Trier Green head coach Bob Melton. “Any time we can raise money for something like Misericordia it’s terrific".

Misericordia supports children and adults with intellectual and developmental disabilities and is located in Chicago.

Thank you to all for supporting a great organization. 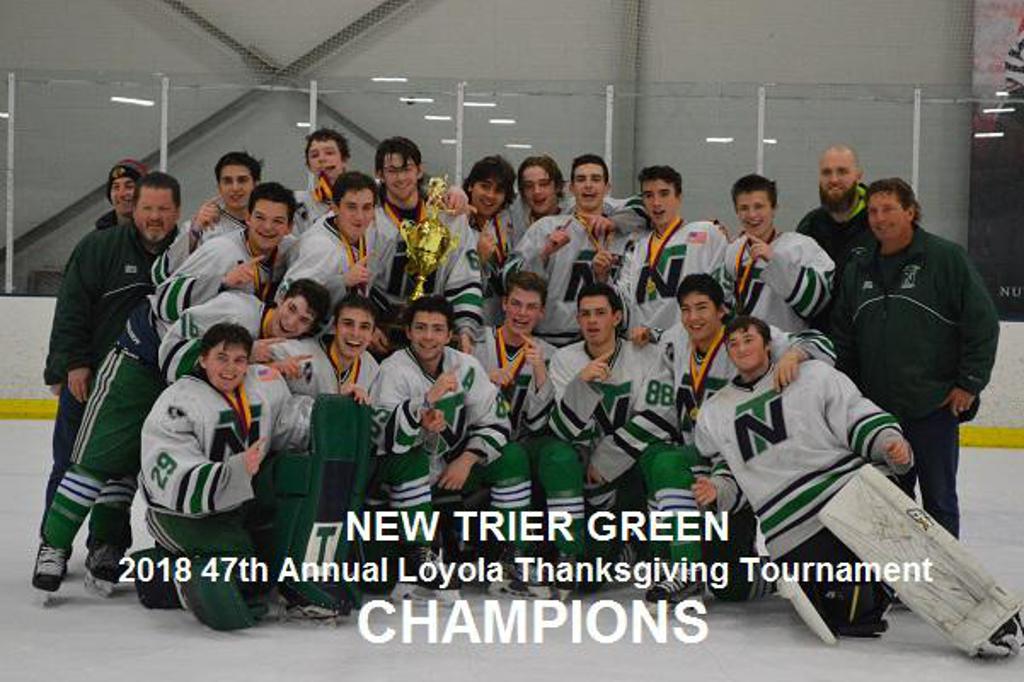 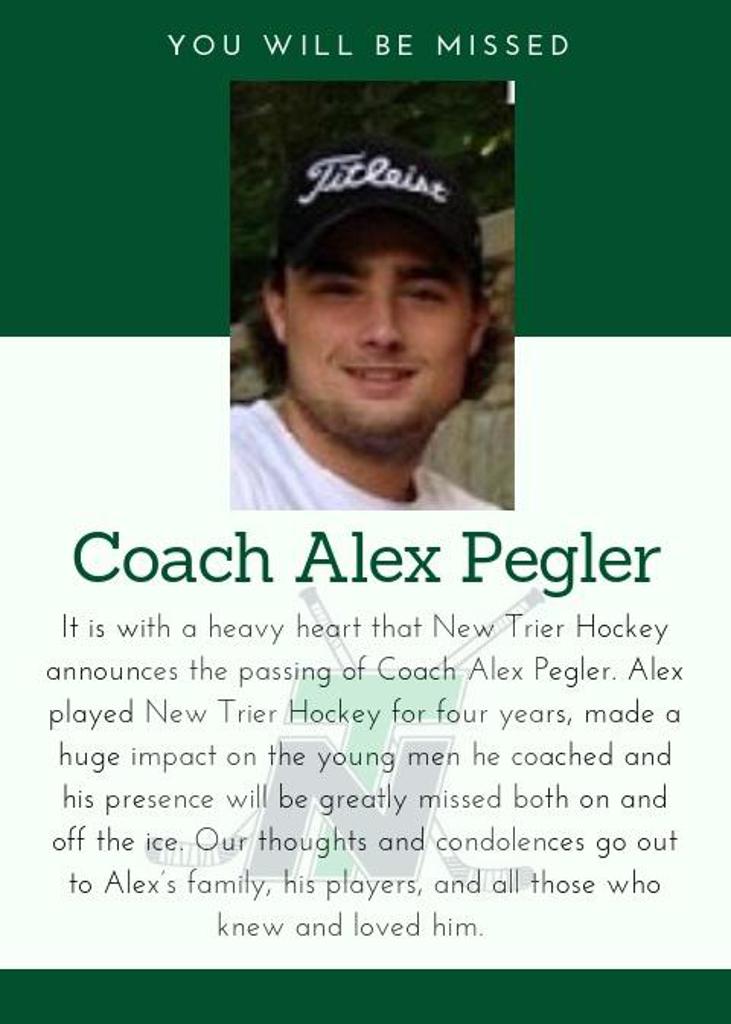 STORE CLOSED AND WILL REOPEN SOON!!!

See the link below to access the video highlights shown at the banquet.

Congratulations to NT Green for winning the Illinois State Championship!

NT Green beat Providence Friday night in front of a record breaking crowd of 11,192 people with a score of 4-2.

It was a remarkable season for Green who won the Nike Bauer Invitational Tournament, the Chicago Showcase, the Loyola Thanksgiving Tournament, the Hoosier Cup, the SHL President's Cup and finally the State Championship.

"With a 67-9 overall record and no losses to any Illinois team, this will go down as one of the best seasons ever for an Illinois hockey team." - Brad Burton, team manager.

Congratulations to all of our graduating Seniors! 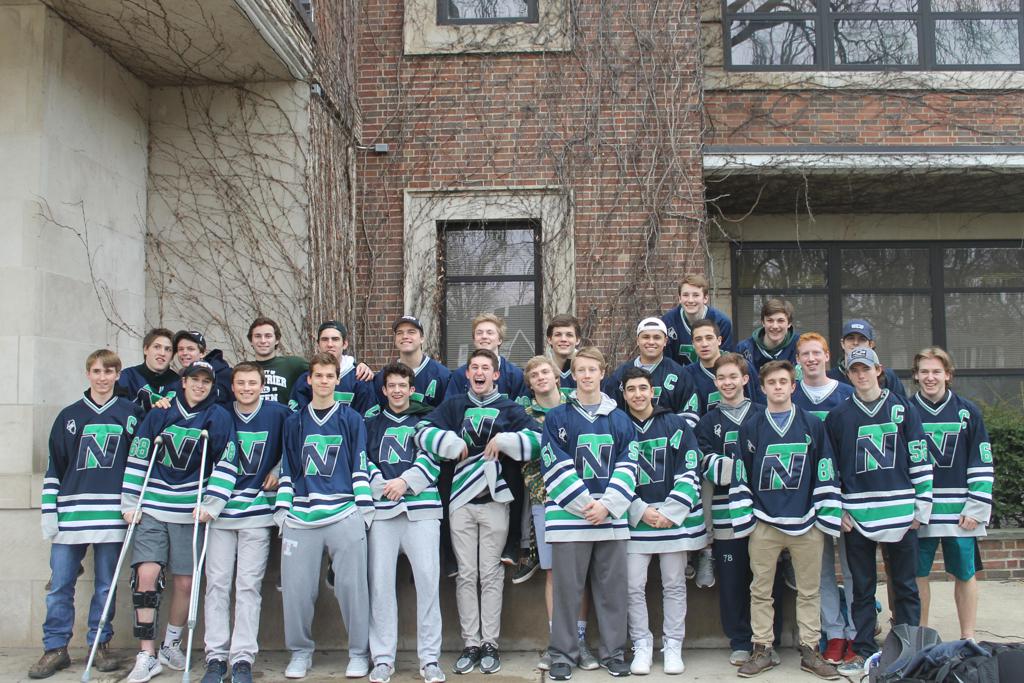 Seniors on Sleds a huge success! 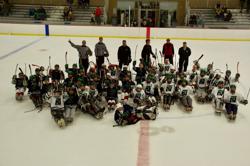 Last Sunday, March 19th, the New Trier Boys and Girls Hockey Clubs hosted an inaugural exhibition sled hockey game at the North Shore Ice Arena to raise awareness and funds for the Great Lakes Adaptive Sport Association (GLASA).   New Trier Hockey’s seniors and the GLASA Falcons players entertained the fans with their spirited play and athleticism.  After the game, many New Trier players talked about how much fun it was to play sled hockey, and how hard it was compared to their more familiar game.  Those in attendance were impressed with GLASA’s mission and the wide-ranging programs it offers for disabled athletes.  (Please visit www.glasa.org for more information about this incredible organization.)  The family-oriented fundraiser, which included Blackhawk Alumni, Chuck-A-Puck contest, Silent Auction, Raffle & Bake Sale, raised $8400 for GLASA and created lasting memories for all participants.

Thank you also to the staff at GLASA, and the GLASA Falcons players, for making this event possible and showcasing the amazing sport of sled hockey! 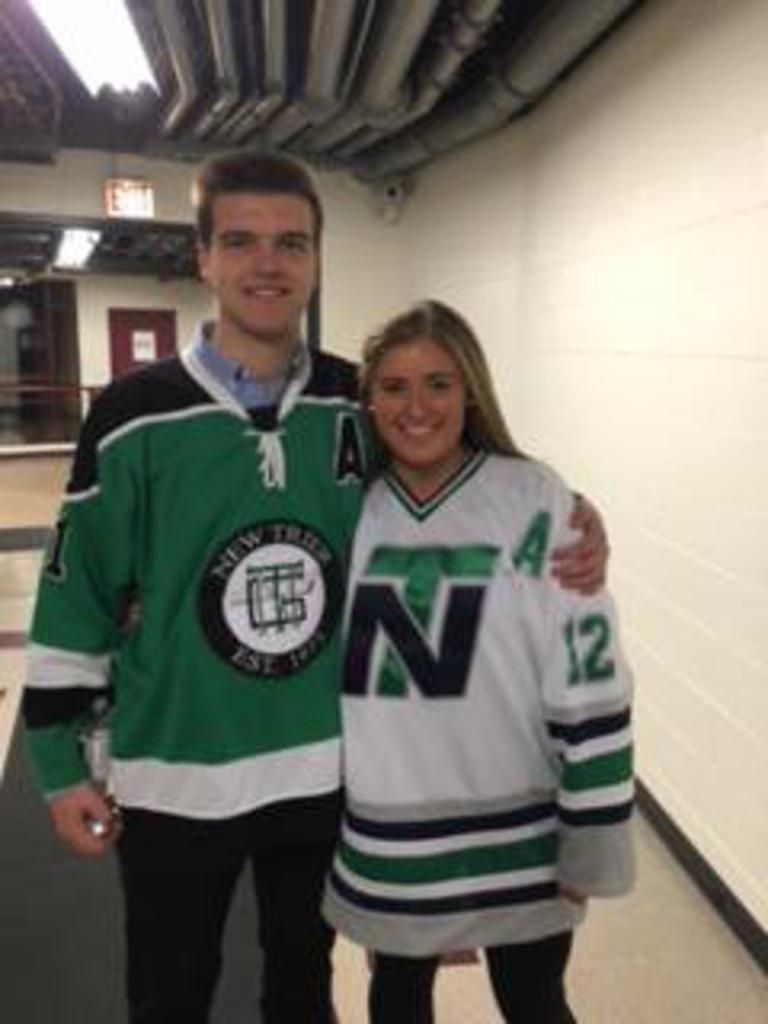 In what has become a Homecoming weekend tradition, New Trier hockey players once again joined forces with the local communities in the fight against pediatric cancer.  On Saturday, October 15th, players from the boys’ and girls’ teams spread out in Winnetka, Glencoe, Wilmette and Northfield to collect donations for the Bear Necessities Pediatric Cancer Foundation.  Established in 1992 and named in memory of eight-year-old Barrett "Bear" Krupa, who died after a courageous five and a half year battle with Wilms Tumor, the Foundation’s mission is to eliminate pediatric cancer and to provide hope and support to those who are touched by it.  Through its “Bear Discoveries” and “Bear Hugs” programs, the Foundation funds cutting-edge research and provides for the immediate needs of the children and families battling the disease.

New Trier Hockey’s efforts on October 15th, combined with an online challenge (won by the Blue Team!), raised a remarkable total of $16,500, which easily surpassed last year’s record total.  One hundred percent of the money collected went directly to Bear Necessities and will be used to brighten the lives of Chicago area pediatric cancer patients and to provide essential support for their families.

As in prior years, the success of this year’s fundraising event would not have been possible without the generous support of residents in the New Trier communities, players’ families and friends, and the following local businesses where players collected donations on October 15th:  Dunkin Donuts in Glencoe, the Wilmette French Market, the Grand Food Centers in Winnetka and Glencoe, No Man’s Land Pizza & Grill in Wilmette, Once Upon a Bagel, Panera Bread in Wilmette, Ridgeview Grill, Starbucks in Winnetka, Glencoe and Wilmette, Three Tarts Bakery and Café, and Walker Bros. Original Pancake House in Wilmette.  Please remember to support those who support the Club and its philanthropic activities!

The New Trier Hockey Club provides student-athletes with opportunities to participate at the highest level of high school hockey in an environment which promotes development of skills, teamwork, sportsmanship, and competitiveness, while recognizing a commitment to academic success.

The New Trier Hockey Club has a Policies and Procedures tab on the website to give you year round access to this valuable information, and to keep you up to date on improvements.

Also available for you easy access is the NTHC social media policy.  This policy encompasses all of the NTHC community (coaches, players, parents and board members) and make us one of the most progressive programs in the state in this regard.  Click Here to learn more!

RT @GlencoeAnchor: Need something to listen to during the day? You're in luck! The podcast is back! This week, the guys talk basketball, wr…

This week, New Trier Hockey rests our legs while we focus on the books! We are wishing Good Luck to all players and… https://t.co/1syjsNGLeQ

RT @CN100Sports: CN100Sports Game of the Week @GBNhockey vs @newtrierhockey Live now on Comcast Channel 100 or Sunday at 12pm info at http…

RT @floriani_brian: So grateful @newtrierhockey; significant on & OFF the ice; sport is really about developing PEOPLE, not just athletes #…

💚Green takes a 3-2 win in a tough battle against Stevenson for Senior Night! Congratulations to all Seniors and the… https://t.co/5GIBP88H1B